Pulling up to Leith BMW today, it was clearly not just another day at our center. The giveaway was the BMW USA tent set up out front, along with a set of BMW i flags flying, and a row of six BMW i3s parked out front. The future had arrived in Raleigh.

Information boards were set up in one corner, a table of catered food and refreshments were tempting us from another, and in the middle was a table with two BMW i Brand Specialists. They were working quickly to register the queue of people that had formed, all excited to feel what driving will be like in the future. 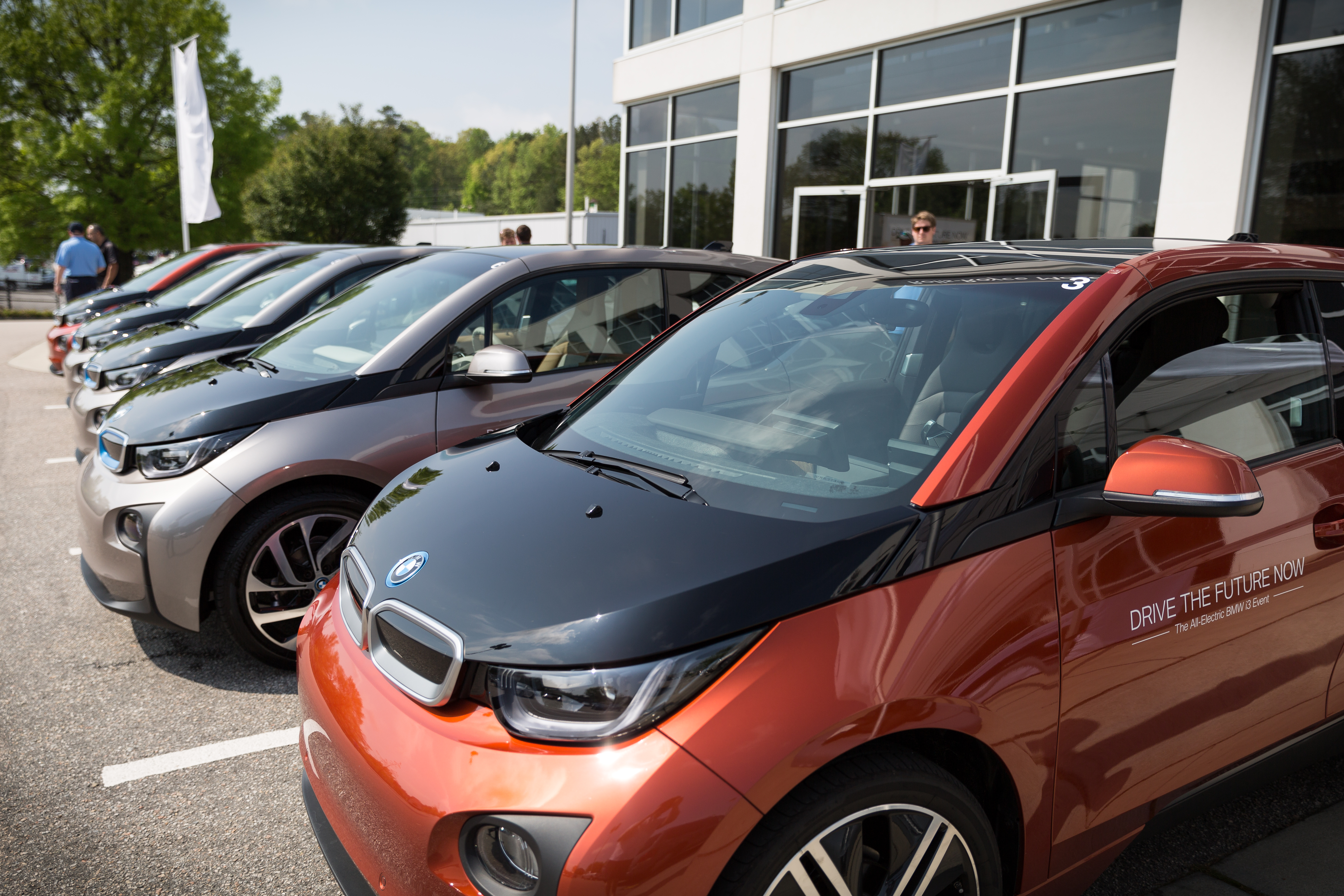 You had the chance to pre-register for the event, but we hadn’t done so. A paragon of efficiency, the young woman got us set up in under two minutes. Everyone wearing the blue BMW i shirts were young, in fact. The atmosphere was electric, no doubt thanks to their unbridled enthusiasm and the fresh fervor with which they ran the event. Innovation is meant for everyone, and BMW knows that young minds excel at communicating this vision of a sustainable auto industry.

After some very brief paperwork – a misnomer given that the entire process was completed digitally – we walked right outside and were put in the car. There was no walkaround, no detailed instructions, and no handwringing. The guy helping us showed us where the power button was, then explained the test route and said he’d see us again in about ten minutes. “You aren’t coming with us?” we asked. He just laughed and walked away to help someone else. Evidently the future was something we would have to see for ourselves.

Backing up briefly, we want to touch on the design of the i3. There were two color variants present at our center that day out of a possible six. We drove a Solar Orange Metallic i3, but there were also several Andesite Silver Metallic cars in waiting. Regardless of the color choice, the hood, roof, and trunk will always be black as part of BMW i’s design aesthetic. The car is smaller than it looks even in pictures, but diminution is not a drawback. In our opinion, the official media photos do not flatter the i3 as much as they could. There are no straight lines in its design, everything curves and flows like water droplets.

In the front, the signature BMW twin kidney-grille stands out as ever, even though it’s purely an identifier on the i3. Blue accents run around the car’s nares and also halo the roundel. On either side, the u-shaped LED running lights are apparent, congruent to the taillights on the rear panel. Another facet of the car that you can’t immediately appreciate is its wheels. You have to see them from an angle, when the i3 is turning to understand how narrow they are. We asked, and part of the thinking behind this is an issue of weight – the i3 weighs a mere 2700 lbs. It also lends itself to an excellent turning radius. 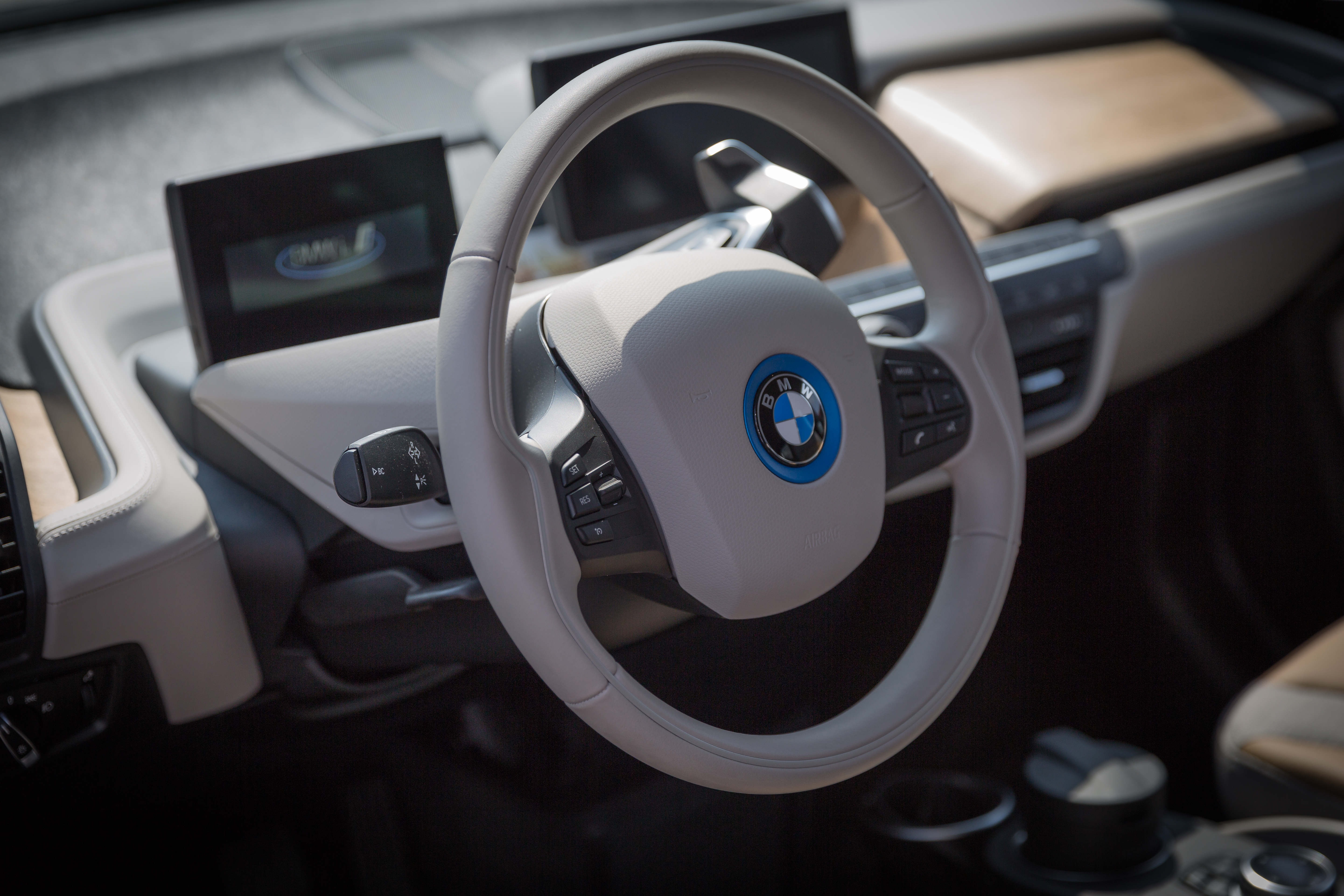 Back inside, we had turned the car on. It beeped once and the display screens lit up, but other than that there was no change. It was totally silent. Tapping the accelerator lightly, the car jolted forward. This is the power of BMW’s eDrive Motor, which delivers full and instantaneous torque. From a standstill, 170 horsepower and 184 pound-feet of torque are immediately available, unlike in vehicles hampered with a combustion engine. As a result, the i3 is the fastest BMW from 0 to 35 miles-per-hour in under 4 seconds, and achieving a speed of 60 mph in only 7 seconds. If you thought EVs couldn’t accelerate, this car will prove you wrong. It’s also virtually silent, which provokes an uncanny response, as if you’re going faster than you should be. 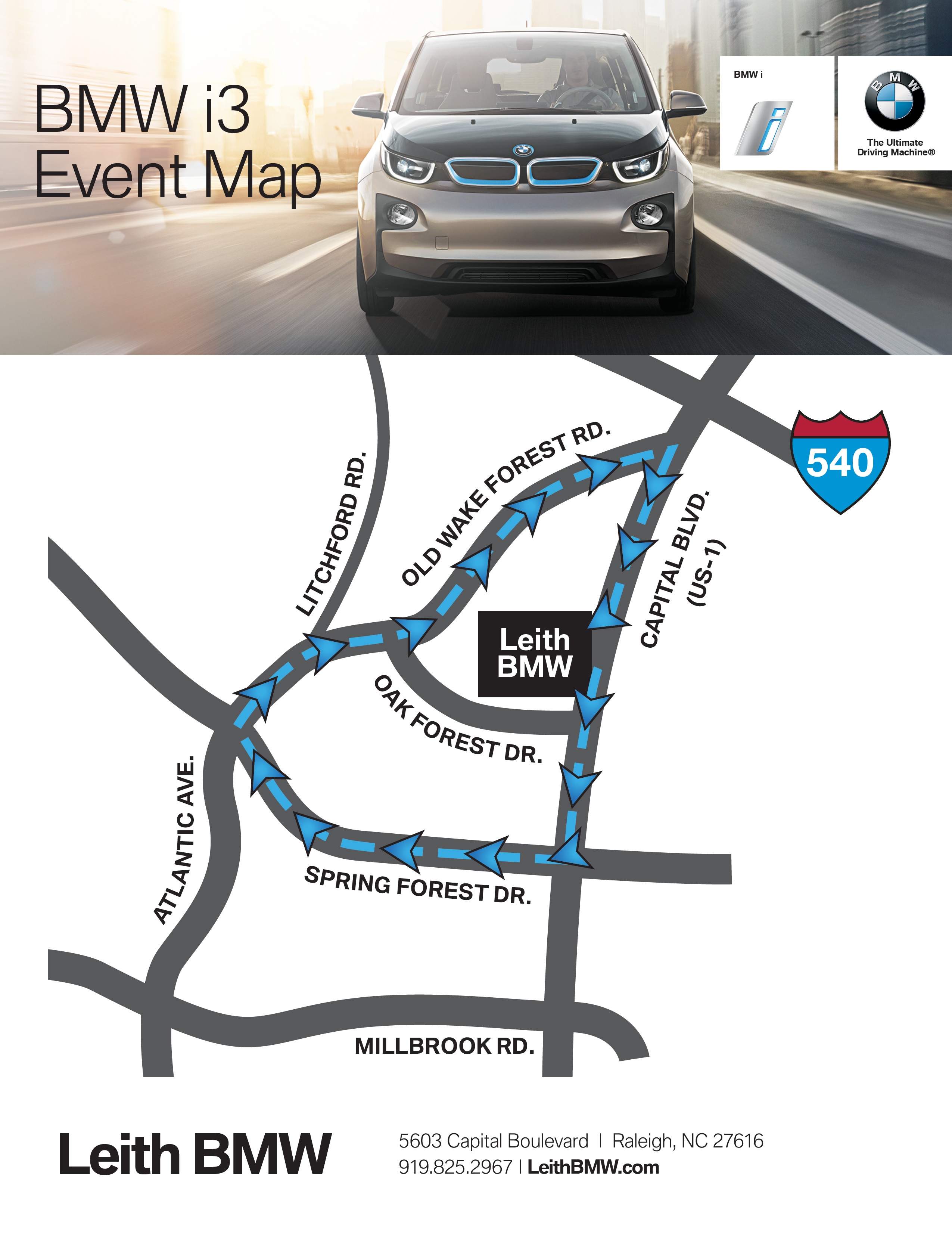 The test route was relatively short compared to one of our own, and that was really our only complaint. We wanted to do several more laps. It was especially frustrating having to contend with other traffic that couldn’t zoom away from stoplights nearly as fast as we could. When you’re talking about EVs, the usual gas mileage jargon is dropped in favor of effective range. On average, the i3 has a range of between 70 and 110 miles on a full charge. That’s in Comfort mode. There’s also Eco Pro and Eco Pro+ mode which will extend the range by adjusting the car’s systems to their most efficient. We asked, and using the included 220-watt in-home charging station, you can charge an i3’s batteries from zero to full in about three hours.

Something else that will extend the possible action radius is brake energy recuperation. When your foot isn’t on the accelerator, even before you’ve depressed the brake pedal, the i3 will already be slowing down. It takes some getting used to, but it’s not cause for alarm. (We actually had to double check to make sure the parking brake wasn’t on the first time we eased off the throttle). It’s just the regenerative braking kicking in. As you brake, the electric motor becomes a generator, sending power back to the battery. 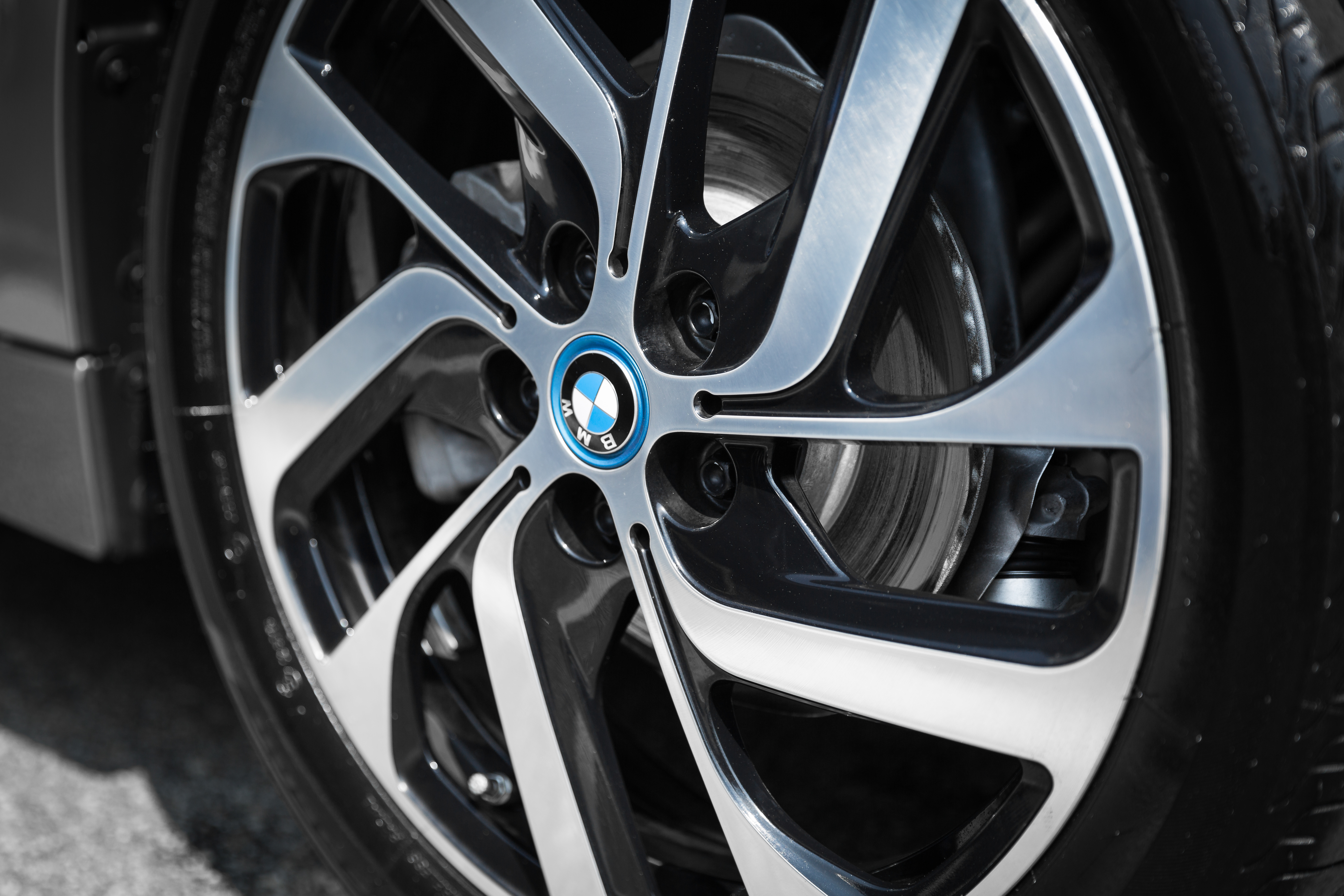 The windows were down at the start of our drive, but we rolled them up about halfway through – easily done since they’re one touch auto-scrolling up and down. Doing so allowed us to observe just how silent the i3 is in motion. There’s the faintest of ripples, a very gentle hum from the motor while you’re cruising down the road. The vehicle is as well insulated as you would expect a BMW to be, so there’s barely even road noise creeping in.

We pulled back into Leith BMW and the i Team was there waiting to hear our reaction. At first we didn’t really know what to say. It’s so unlike any car we’ve driven before. Without a benchmark to compare it to, we have to find a new set of words. Everything about the i3, from the diverse and sustainable materials used to fill out the interior to its surprising and swift performance rejects what cars have always been. We spoke to a gentleman there who has driven a handful of EVs, including a Tesla, and he said that for the i3 to respond so well and feel so good on the inside while starting at such an affordable price is completely remarkable. He was blown away, and we both agreed that the difference was BMW. 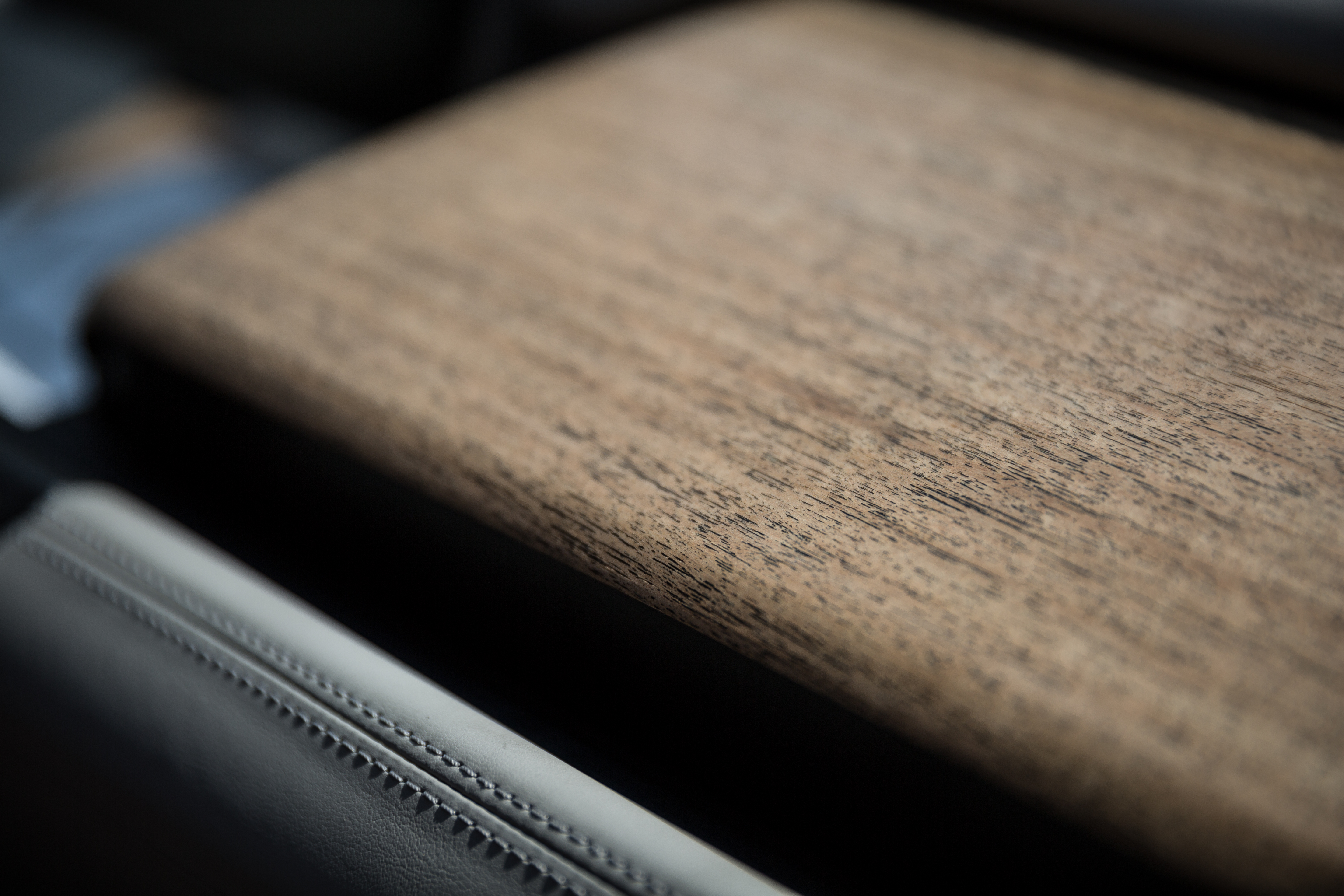 After our drive, we walked back to the main table and filled out a ten-question survey about our experience. They thanked us for attending the event and handed us a BMW i tote bag made from 100% recyclable materials. Our own General Manager, Don Sigmon, also insisted that a personal touch be added to every participant’s bag: a set of Leith BMW key chains and a ballpoint pen. Perhaps the only thing more gratifying than the car itself was how well the entire event was run.

We’ve been using the phrase “the future” liberally throughout this entire campaign, but if you were there today, you know we weren’t doing so without cause. The BMW i3 is impressive for what it is, and it is only the beginning. 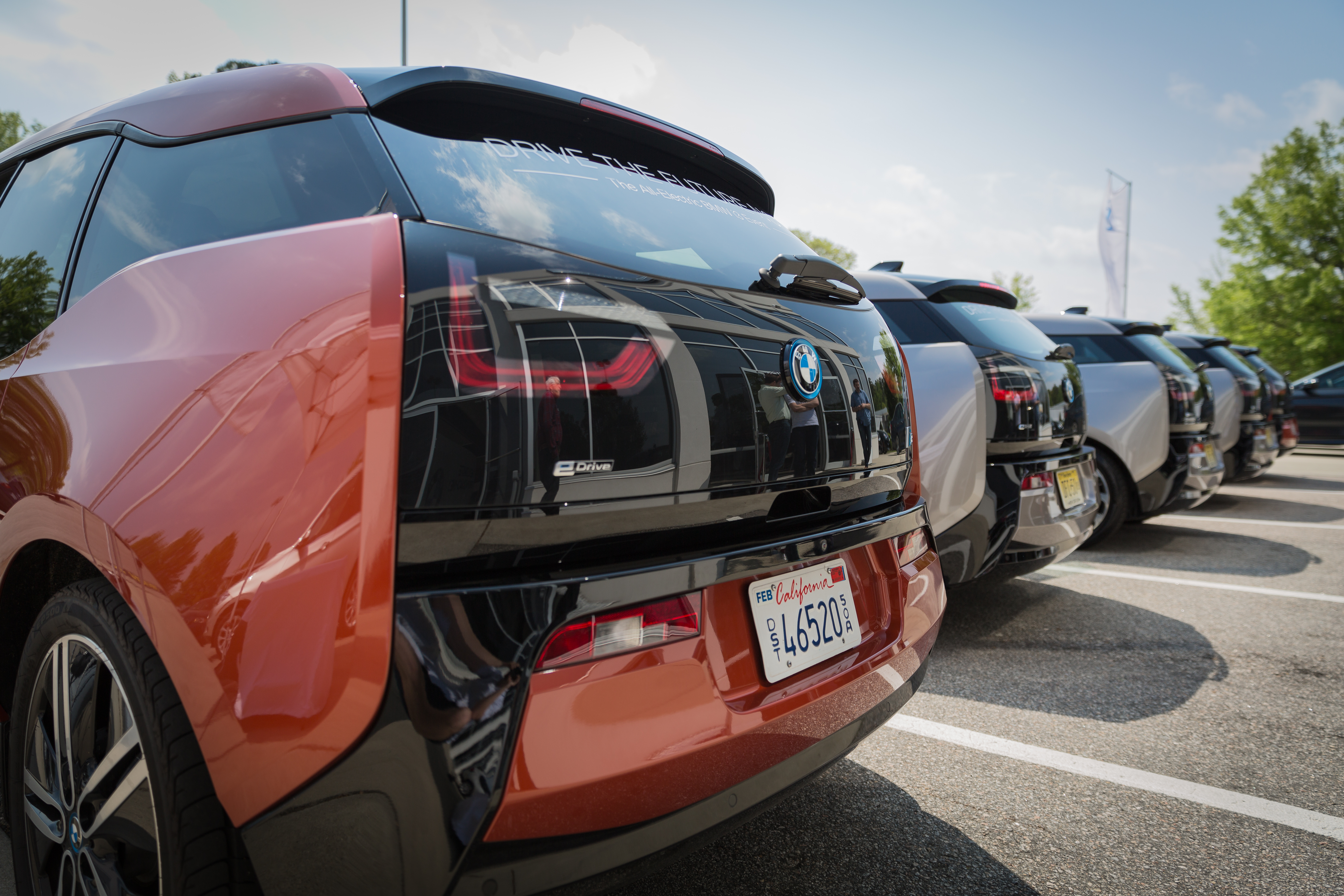