This week, Leith BMW sponsored the Southeast Alternative Fuels Conference & Expo, which lasted from Wednesday to Friday. The conference focused on bringing together groups and individuals from all over the region to discuss clean energy. Attendees enjoyed the thoughts of more than a hundred speakers as well as a ride-and-drive event.

As part of its sponsorship, Leith BMW was on site with an i3 for the ride-and-drive event, and while that has become almost commonplace, the real excitement was generated by a special guest.

This BMW i8 came to town to visit its sibling, the i3. The matching colors are a coincidence – the city car has been wrapped for weeks and we didn’t know what color the i8 would be until it got here.

It was here solely for the conference, on loan from BMW USA in New York. The guy who drove it down here is named Jeff and he stayed with the car the whole time. You can think of him sort of like a guy with a briefcase handcuffed to his wrist, except instead of a briefcase, he has to stand guard over a hybrid sports car widely regarded as the future of the automotive industry. It’s a marginally more comfortable duty.

Thursday we walked over to the convention center in downtown Raleigh just to look at the car and take some pictures. Situated next to the i3, you get a sense of how large the i8 is. Perhaps large isn’t exactly the right word, but it is long and low. We’ve talked before about why the i8 is shaped the way it is, its overall design largely influenced by the long battery pack running along the center of the car.

As we were holding our phone up to the window, trying to get a picture of the interior, Jeff appeared and said we could open it up. The car beeped as he clicked the unlock button on the key fob, and the lights shone, adding to the spaceship vibe. Then the doors fold up and, well, the car doesn’t look anything less than awesome. 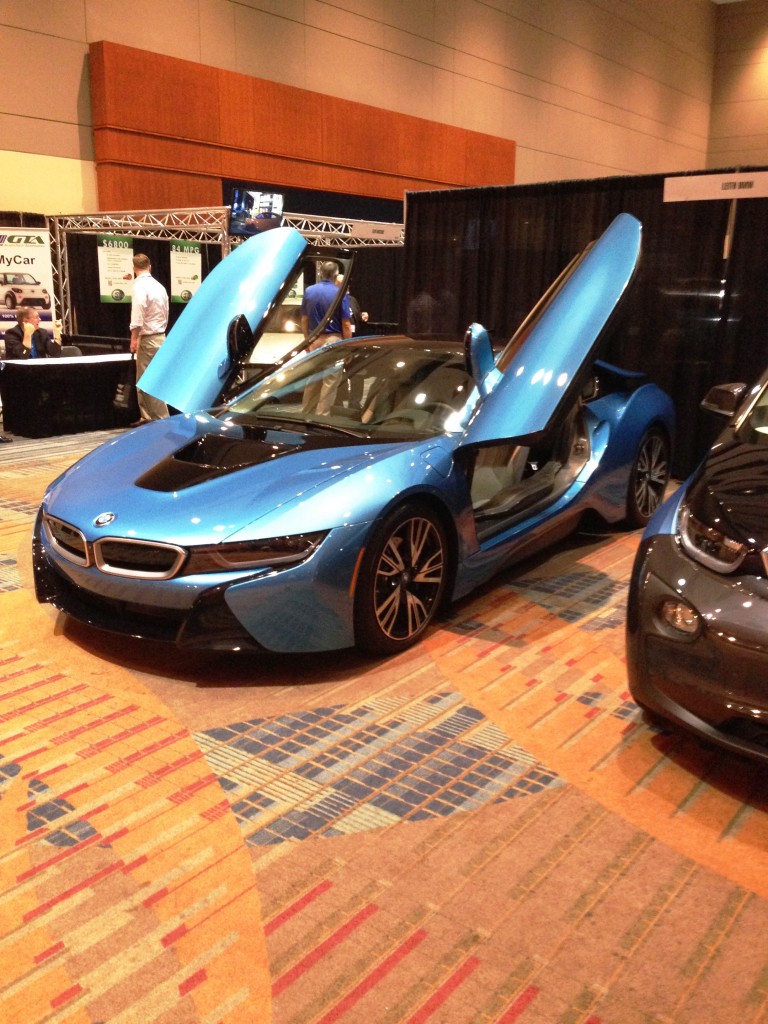 It’s a different story for anyone trying to get into the car, though. Take it from us (the 6’3” author of this post), getting seated is a specialized maneuver. We only got to try it twice, but as far as we can tell, the best way to go about it is to face away from the car and sit down in the seat, then swing your legs in over the raised door sill. Once inside, we were free to appreciate the exposed carbon fiber frame, the minimalist center stack, and the enclosed feeling. It’s recognizable as a BMW interior, but it’s been perfectly tailored to fit the i8. 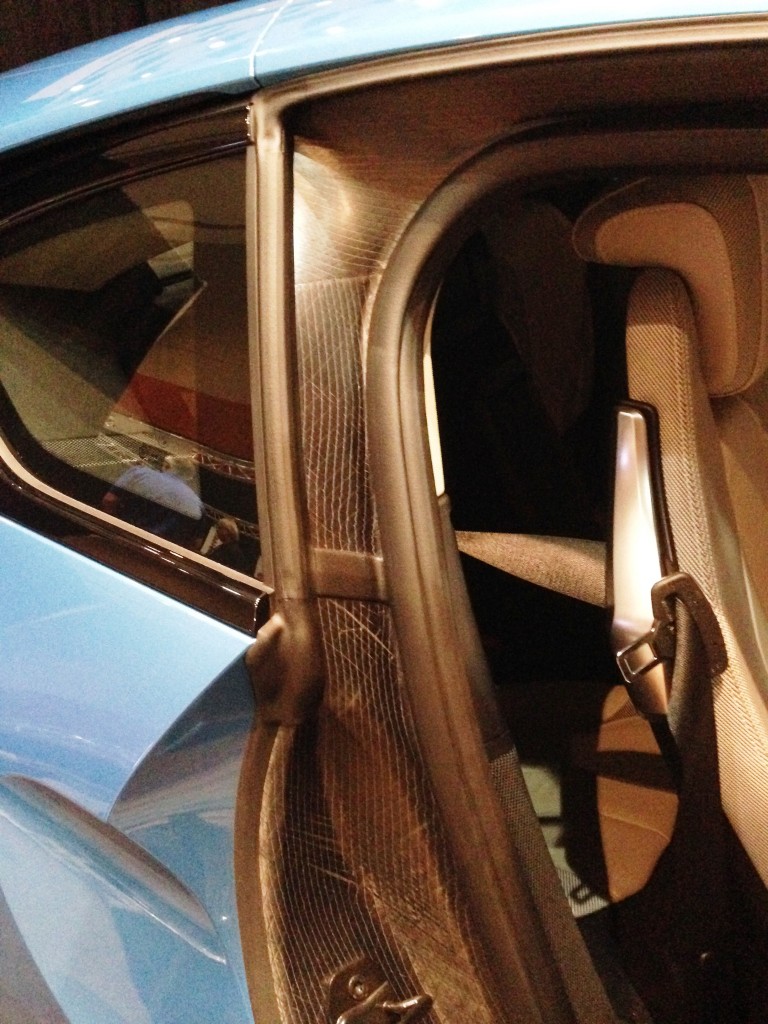 We had a chance to talk to Jeff both yesterday and this morning when he was kind enough to offer us a ride around the block. He’s not just a representative sent to keep people from leaving fingerprints on the car. Instead he works closely with the BMW i program both as an envoy to DC charging station manufacturers and an ambassador to events like this week’s conference where he is on hand to answer peoples’ questions.

When we asked about the i8’s availability and production run, he couldn’t give a firm answer. “They got as many pre-orders for it as they were planning to build originally,” he explained, “so I think now they’ve had to go back and say ‘Well let’s build more.’” We know that Leith BMW will be getting its first model sometime next month and that one is already sold. 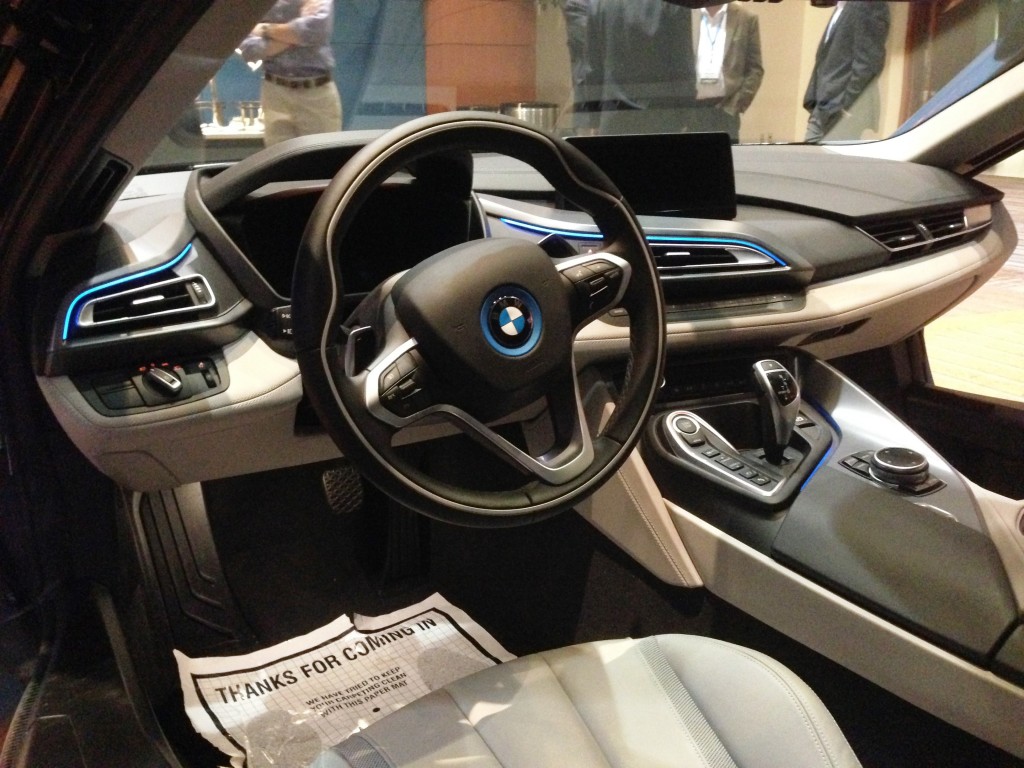 Someone asked Jeff how his drive down from New York was and he said it was fun, but a little bit scary. “Everyone is trying to take pictures of you, and they just sit in your blind spot, so I’m kind of paranoid about changing lanes.” Admittedly, you don’t know what blind spots are until you drive a mid-engine car, but that’s what the blind spot monitoring system and surround view cameras are for.

As for people taking pictures, sure enough, when we were on our “test-ride” today, someone pulled up to us next to the stoplight and said, “Hey man, do you mind if I take a picture of your [nice] car?” or something like that.

Most of the questions we had for him slipped our mind when he pulled up this morning, but one of them might have been as puerile as “So how does it drive?” He answered that when we took the ramp off of South Saunders onto Western Boulevard in Sport Mode. We didn’t have to ask if it was in Sport Mode because we could look over at the instrument panel and see that the gauges were displayed in orange. If you have doubts about the sound of a hybrid sports car with a three-cylinder engine, get rid of them. The exhaust note has what we can only describe as an electric quality, which is sort of what we imagine volcanic thunder sounds like. There’s no better way to describe it than it sounds right.

We also didn’t end up in the retaining wall, so we’d say the i8 handles pretty well.

Too shortly we were back on Fayetteville Street, gliding through downtown in Comfort Mode. Thinking back to our experience in the i3, we asked Jeff about the regenerative braking on this car, and he said it’s different. “The i3 you can pretty much drive with one pedal because the regen is so strong and so immediate. This car is more lenient. You feel it, but there isn’t a fixed point where it switches over to friction braking.” We take it to mean that the i8, being capable of higher speeds than the i3, will take more factors into account when you put your foot on the brake pedal.

Overall, this brush with the i8 has left us looking all the more forward to a time when we’ll be able to drive it ourselves, and we hope that day is soon. We’ve tried to leave you with our most prevalent impressions of the car, but if you have any other questions, let us know and we will do our best to answer.

This is Why Your Tire Pressure Changes in the Winter
BMW Designer Karim Habib Discusses Proportion, Vision