In episode three of LeithCars.com’s Zero to 60TV show, regular host Mark Arsen is joined by copywriter Steve Ulin and account executive Ebony Douglas to talk about three subjects, all of which are centered around one brand: BMW.

Specifically, the episode is organized into three parts: the car, the team, and the launch. The car is the BMW i8, the team features Leith BMW technician Aaron Jones, and the launch is about Leith BMW’s new showroom on Capital Boulevard in Raleigh.

About the i8, there’s not much we can write that hasn’t already been said (and if you’re a BMW fan you know it already anyway!). The i8 is the apex of BMW’s lineup, which you can tell with just a single look. Although its engine has only three cylinders, its hybrid motor produces an incredible amount of power (357 hp and 420 lb-ft of torque to be exact). 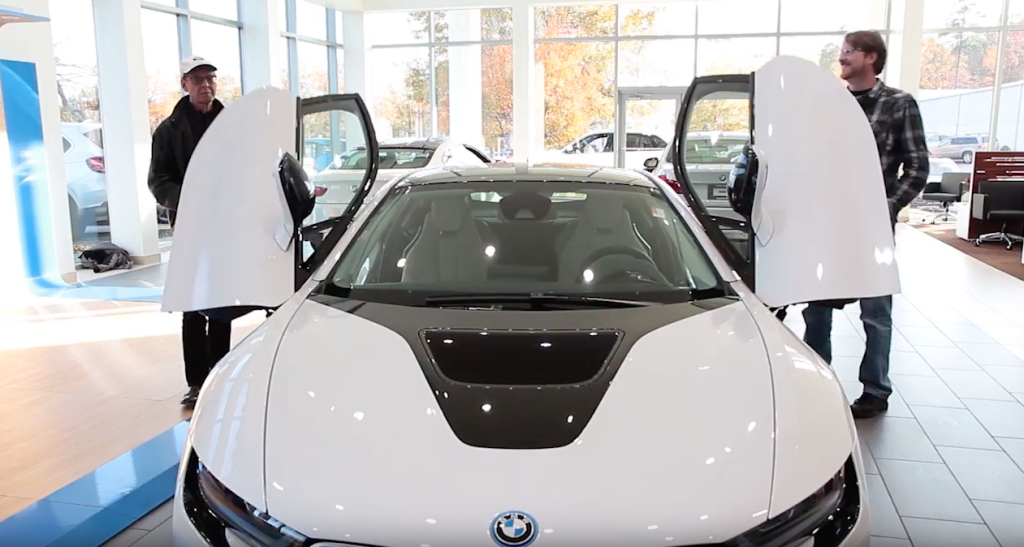 Aaron Jones was gracious enough to talk about his experiences working on the breadth of BMW’s vehicles, travelling around the east coast for various BMW training courses, and recording a hot lap in an M3 at BMW’s production facility down in Spartanburg, SC. We were grateful that Aaron could spare us a few moments, and we’re delighted to meet such an enthusiast who works on some of our favorite vehicles.

Finally, the launch referred to the grand opening of our new dealership on November 19 at the same location as our previous building. After several months of construction we were pleased to unveil the only BMW dealership in North Carolina engineered as masterfully as a BMW. We kicked off the event with live music and refreshments, let people experience the i8 for themselves on the showroom floor, and had a blast with our slot car competition, which awarded the track to the customer with the best recorded time.

All in all, this is a BMW-focused episode, and is a great way to learn from a range of interested fans in just eight minutes. Be on the lookout for our next episode, which may also feature another globally recognized hyper car, and give us a shout if you see us while recording around town in Raleigh, Cary, Apex, or Wake Forest.

New Episode of Zero to 60TV Focuses on Leith BMW, i8, and Technician Tips was last modified: December 20th, 2016 by Leith BMW